If you’ve tried making French macarons, you probably know how finicky they can be.

They’re sensitive to temperature, humidity, ingredients (should the egg whites be aged? Should the almond flour be blanched?), mixing technique, to name just a few of their pet peeves. It seems like there are about a hundred different ways macarons can potentially go wrong!

But when they’re right, they’re so, so right. Pure decadence seems like a pretty accurate way to describe the perfect macaron.

What Are French Macarons?

The cookie portion, which are called the macaron shells, are made of meringue (egg whites + granulated sugar), almond flour, powdered sugar, and sometimes flavorings (such as vanilla) and food coloring (if you want colored macarons).

The macaron shells are sandwiched together with some type of filling, such as buttercream, jam, chocolate ganache, etc.

What Are the Methods for Making Macarons?

There are three different methods for making macarons: the French method, the Italian method, and the Swiss method. The difference between the methods lies in how the meringue for each is made.

The French method for making meringue is the easiest method in the sense that it involves the fewest steps. However, it yields a less stable meringue than the other two methods.

Using the French technique for making meringue, you whip uncooked egg whites while gradually adding sugar. You can easily do this with a handheld electric mixer.

Once it forms a light and fluffy meringue, you gradually fold in the almond flour and powdered sugar 1/3 at a time to make the batter.

In the Italian method, you make meringue by making a hot syrup of sugar and water. The hot syrup is added slowly into egg whites while beating until it forms glossy stiff peaks. The best way to do this is with an electric stand mixer.

The resulting Italian meringue is denser and more stable than French meringue. Once you have the Italian meringue, you gradually fold in the almond flour and powdered sugar 1/3 at a time to make the batter.

Personally, my favorite method for making macarons is the Swiss method, which is kind of a hybrid of the French and Italian methods for making meringue.

To make meringue using the Swiss technique, you will need a double boiler. You heat sugar and uncooked egg whites in a double boiler until the sugar is dissolved. You can test this with your fingers. Dip a finger into the egg white mixture and rub it on another finger; if you don’t feel sugar crystals, it’s good to go. Alternatively, you can test this with a thermometer; the temperature should be around 150F.

Then you pour the egg white mixture into a bowl and beat it with a handheld electric mixer until it forms stiff peaks. The resulting Swiss meringue is not quite as stiff as Italian meringue, but is much more stable than French meringue. At this point, you gradually fold in the almond flour and powdered sugar 1/3 at a time to make the batter.

How to Make Macarons Using the Technique for French Meringue

Because I wanted to show you the basic method, this recipe for Apple Pie Macarons uses the French method to make meringue.

How to Pipe Macarons

How to Make American Buttercream

Start by getting out all the ingredients to make the buttercream.

How to Fill and Decorate Macarons

How to Store Macarons

You can store macaron shells in an airtight container layered between pieces of parchment paper at room temperature for up to 3 days before filling them.

Store filled macarons in an airtight container layered between pieces of parchment paper in the fridge for up to 1 week.

Equipment for This Recipe

How Do I Age Egg Whites?

Is it Necessary to Age Egg Whites to Make Macarons?

Honestly, I didn’t find it completely necessary to age egg whites for multiple days. The thought behind aging egg whites is that it reduces the egg white’s moisture content and allows the proteins to relax. Ultimately, this results in a more stable meringue.

What I did notice makes a big difference is to let the egg whites sit at room temperature for about 1 hour before making macarons. Additionally, what I have found helps a lot to make a stable meringue is to use the Swiss method for making macarons instead of the French method.

The stage in preparing French macaron shells where the batter is worked until smooth, shiny and flowing.

Should Macarons be Chewy?

The outside crust of macarons should be crisp, and the interior should be slightly chewy but not mushy.

How Do You Know When Macarons Are Done?

Macarons are done baking when they form ruffled, lacy-looking “feet” on the bottom. When they’re cooked enough and you touch the top of the macaron, they shouldn’t wiggle at the feet.

Should Macarons be Refrigerated?

Once macaron shells are filled, they should be refrigerated. Store filled macarons in an airtight container layered between pieces of parchment paper for up to 1 week.

Did you make this recipe? Please rate it and leave a comment below because I love hearing from you! You can also tag @dailydesserting on social media. To enjoy your daily dessert FOLLOW ME on Instagram. Xoxo, Faith 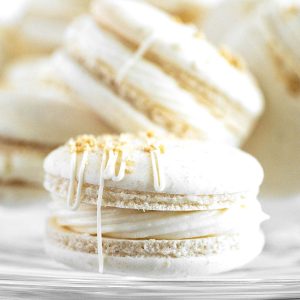 For the Vanilla Macarons:

For the Vanilla Buttercream:

To Assemble the Macarons:

To Decorate the Macarons:

Hi, I'm Faith! Daily Desserting was born out of a love for the people in my life who enjoy dessert! And it's dedicated to those of you who believe that a sweet treat isn't only for a holiday, birthday, or other special occasion. Sometimes you just want dessert on a random Tuesday night.