Lookout Cinnabon, there’s a new sweet pastry around; this Mug Cinnamon Roll recipe has sweet, aromatic dough with a buttery brown sugar cinnamon swirl. It whips up in minutes and cooks right in the microwave. Meet your favorite new go-to sweet treat!

It’s a rare person indeed who isn’t tempted by the aroma of Cinnabon. And those evil geniuses know it! They strategically set up shop in places like the mall or the airport where you have no choice but to walk by.

One inhale as you pass the store is all it takes. It smells like a buttery, cinnamon-y paradise!

Or if you’re a baker, of course you can whip up a batch of cinnamon rolls the standard way. With flour and sugar and yeast. A few hours later you will no doubt have something delicious to show for your work.

But what if you don’t have that kind of time? Or if you have a hankering and just want a single cinnamon bun?

Well friends, this Cinnamon Roll in a Mug is here to save the day.

Subtly sweet vanilla dough swirled with a buttery cinnamon brown sugar swirl and topped with a luscious glaze. It’s everything a cinnamon roll should be, but easy to make in just a matter of minutes and won’t leave you trying to eat your way through a batch of buns!

Once you try this recipe, you'll be amazed that you can whip up something so decadent right in the microwave!

How to Make a Cinnamon Roll in a Mug

How to Make the Cinnamon Filling:

How to Make the Dough and Assemble the Cinnamon Bun:

How to Make the Glaze:

Equipment for This Recipe

Variations on This Recipe

What is a Mug Cake?

A mug cake is a cake that’s made in a mug in the microwave! Be sure to use a standard size microwave-safe mug to make this.

Do I Have to Use a Microwave?

Yes, this Mug Cinnamon Roll Recipe was developed using a microwave. It may also work in an oven; however, I have not tested it.

Can I Make a Mug Cake Ahead of Time?

Yes and no. Once you microwave a mug cake, it is typically best eaten within 30 minutes or so. I recommend eating this Mug Cinnamon Roll while it’s still warm!

However, with that being said, you can make the dough and filling ahead of time and then microwave it later!

Did you make this recipe? Please rate it and leave a comment below because I love hearing from you! You can also tag @dailydesserting on social media. To enjoy your daily dessert FOLLOW ME on Instagram. Xoxo, Faith 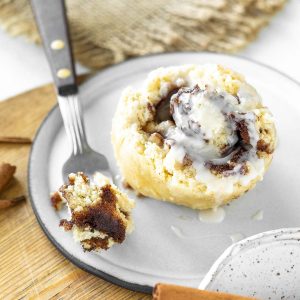 For the Cinnamon Filling:

Hi, I'm Faith! Daily Desserting was born out of a love for the people in my life who enjoy dessert! And it's dedicated to those of you who believe that a sweet treat isn't only for a holiday, birthday, or other special occasion. Sometimes you just want dessert on a random Tuesday night.